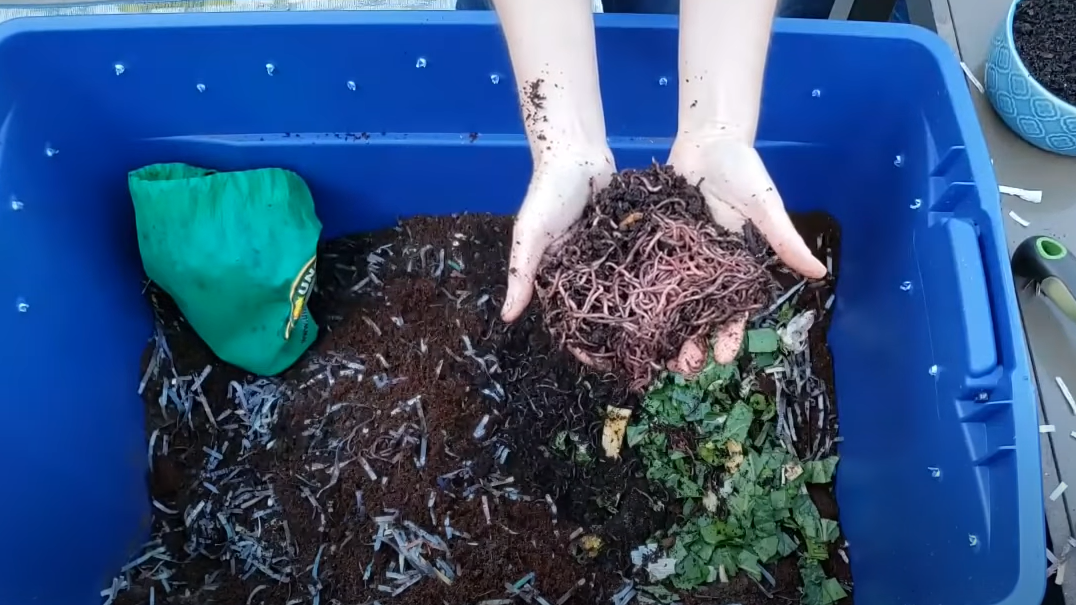 Vermicomposting, also known as worm composting, is a really great way to create some incredible fertilizer for your garden and flower beds. It’s easy, affordable and can even be done indoors! It’s true. Contrary to what some may believe compost does not need to “smell bad”.

Vermicomposting is a great way to divert kitchen waste and garden waste from your curbside bin, and in return get incredible “worm castings” also known as“Black Gold” to those in the know. It is a well balanced fertilizer, full of nutrients, it’s a soil conditioner, it helps promote good aeration and drainage.

1.a burrowing annelid worm that lives in the soil. Earthworms play an important role in aerating and draining the soil and in burying organic matter.

Earth Worms are larger, tend to be more independent or oner worms who live deeper in the soil. Their role is to aerate the soil to allow water and nutrients to get deeper in the soil. They eat a wide variety of organic matter, including living protozoa, rotifers, nematodes,bacteria, fungi and other microorganisms.

Composting worms also known as “Red Wigglers” are one of the most common options of composting worms. These worms thrive in rotting vegetation, compost and manure. They tend to be much smaller than Earth Worms and like to live in large groups. They typically live in the top 6” of the soil where the organic matter is.

So what do you need to get your set up going?

This is a dried brick which is easy to store.

This is what it looks like after it has been hydrated:

Coir is a natural fiber extract from coconut husk. The Coir fibers are extracted from between the outer shell and hard internal shell of the coconut. The fibers are then screened, graded, washed and compressed into bricks. Coir has many applications but is especially useful for gardening as an alternative to peat moss.

A compressed coco coir brick, block or bale should be soaked in water for at least 1 hour before using. Coco coir fibers expand 5 to 7 times in volume when soaked in water. Because of its superior waterholding capacity, coir has excellent air space and drainage. When used in sandy soils, coconut coir fibers help to keep nutrients and moisture close to plant roots instead of washing away. When used in clay soils, coco coir brick helps to break up hard-packed earth and move nutrients and moisture through the soil.

Coconut coir is a bedding material used for the worms. This bedding provides a comfortable environment for worm life, creating an ideal burrowing environment that is neither too dry nor too damp. Worms need bedding to thrive and break down the food matter they’re given. Coir works well because it holds moisture without becoming hard and compacted. It’s completely natural, meaning you’re not introducing chemicals that might affect the worms or the castings they produce. Coir is processed and sold in brick form.

To use coir as worm bedding, first soak the coir in water and squeeze out the excess, like a damp sponge. Fill the worm composting bin three-fourths full with coir or a combination of coir and shredded paper or corrugated cardboard. A suitable worm composting bin allows air circulation and has small holes near the top 6” as well as a lid to keep the worms inside. Add a handful of soil to the coir. The soil’s gritty texture aids the worms’ digestive process. Place the worms atop the coir and let them burrow and get used to their surroundings for a few days. Set a piece of damp cardboard or paper on top of the bedding after adding worms.

The coconut coir you add to the bin should be damp not wet. Think of it like a wrung out sponge. Not a dripping wet sponge.

Next add some shredded newspaper or cardboard. (remember to remove any packing tape, stickers or labels from the cardboard as they are not compostable) Mix that up well.

Now add some garden soil. The worms need the grit from this soil to aid in their digestion process. You do not need much, a few cups will do. Then mix really well.

Now that all three components have been mixed you’re ready for the next step: scoop out a few handfuls to one side, leaving a depression. Your composting worms like to be buried. Then add some kitchen scraps to that depression. No animal products, just leafy greens, apple cores, fruit peels and the like. No meat, No bones and no dairy items.

As noted before, these little red worms love living in groups. Start with about a pound (1000 worms) add them right on top of those lovely kitchen scraps, then cover them back up with the few scoops you moved out earlier. When introducing new worms to a new bin, they can get a little spooked and try to crawl out. You might see them crawling up the sides towards the air holes. To prevent this, add a thin layer of newspaper (or cardboard) and lightly dampen them. This will help those worms acclimate to their new environment.

Now it’s time to plan your weekly feedings. Your worms will eat their body weight each day, so if you added a pound of worms, you’ll need about 7 pounds of food for them weekly. When feeding, rotate your kitchen scraps & garden matter to one half of the bin this week, and then feed the other side next week. The worms will move back &forth and what this does is allows for a more even dispersion of their castings. It will take about two months of this to get useable work castings. Worm castings look like rich dark soil.

When it’s time to harvest some worm castings and use them in your garden, just feed on one side of the bin for a few weeks to keep the worms isolated in that area so you can harvest from the side you have not been feeding. This will keep all those worms in your composting bin. Once you harvest some castings, feed that side again and return to your routine of switching sides each week.

Your worms will reproduce, and you’ll eventually need to add more food for them. As you see your weekly 7 pounds of kitchen scraps being eater faster, this is the sign telling you that your worms have been reproducing and need more food.

Wormcastings are very rick in nutrients but unlike man made fertilizers,they will not burn your flowers or veggies, or damage the soil. You cannot add “too much” worm castings and harm the soil.

The more garden area you plan to fertilize with worm casting the larger the compost bin you’ll need.

The Co-Op does not offer worms for composting for sale, however they can be found on line. One resource that is widely trusted is “Uncle Jim’s Worm Farm”/

Stop by our stores & let us know how your worm composting is going!

We’ll see you at the Co-Op! 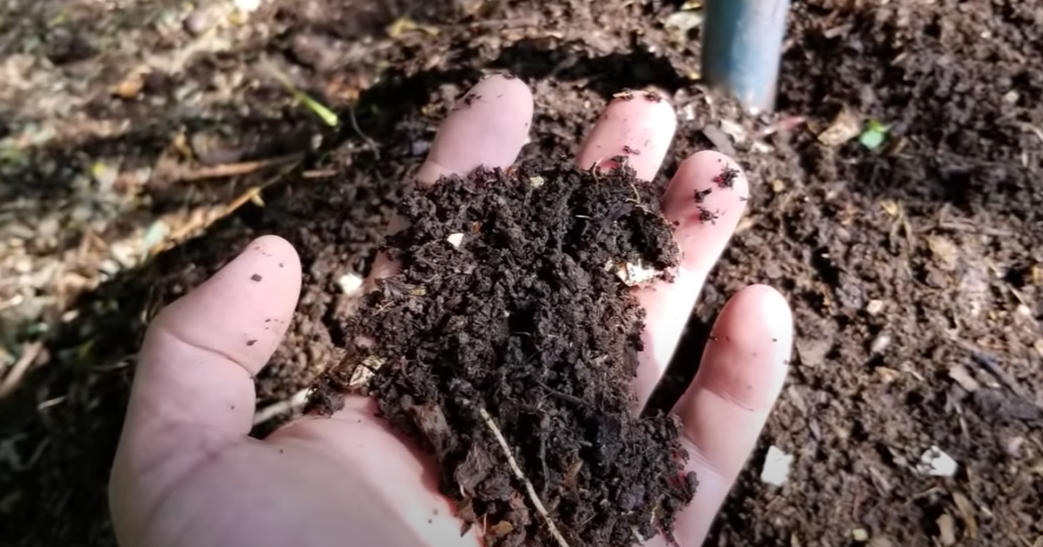 Composting in your yard 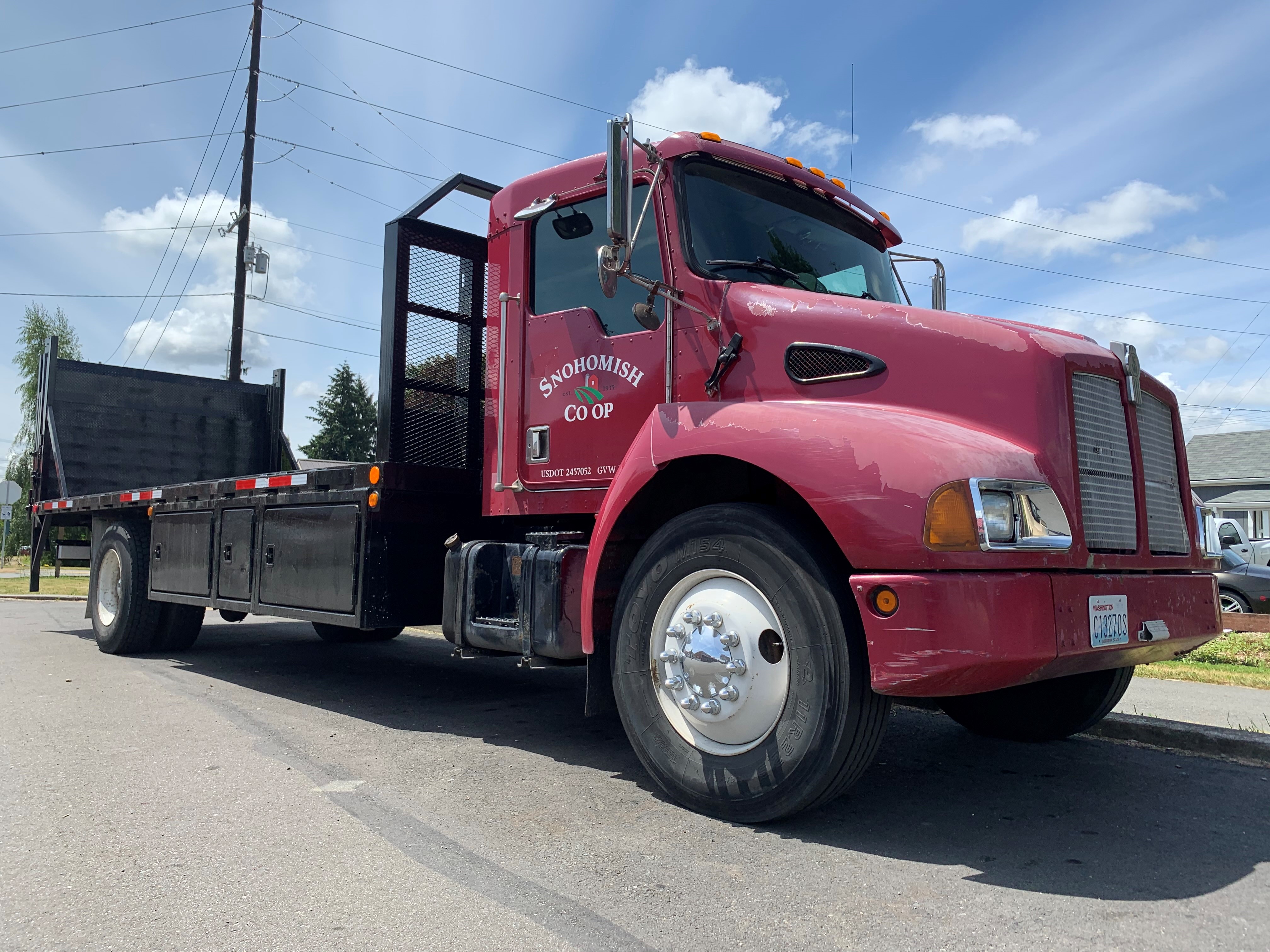